With this project the European Movement in Norway wants to raise awareness of voting rights for citizens of EU/EEA countries across Europe. A special emphasis is given to the Norwegian elections held in September 2015.

In 2015, every foreigner above the age of 18, who has lived in Norway for more than three years, can vote in the municipality and county elections. In the same manner as Norwegians may vote in some elections in other European countries. 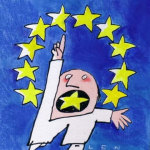 During 2015, there will be several elections in Europe and millions of people will have the opportunity to shape their everyday life and shape how the political system is governed on a national, regional and local level. The European Movement wishes to highlight how the EU and citizens of Europe affects everyday life in Norway, including elections, and vice versa.

During August and September there will be articles published in Norwegian, English or Polish about the democratic rights in the different countries and what is important for those who can and want to vote.

How to vote in the Norwegian elections (POLSKI) (NORSK)